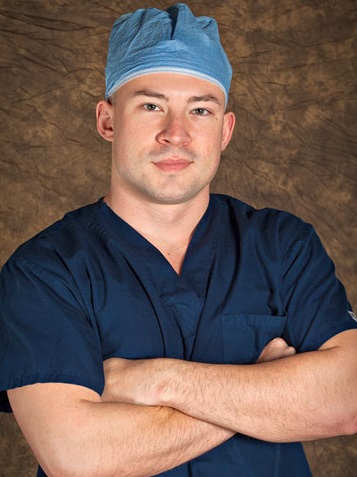 It took Shaun Hoekman, a former Surgical Technology student and A&P tutor at MATC, many tries at jobs, school and even locations to figure out what he wanted to do with the potential he knew he had. He finally found his career home as a surgical technologist in the operating rooms of the Veterans Affairs Medical Center in Milwaukee.

When I graduated from high school I thought I wanted to be a judge.

I had my daughter when I was 16 but still graduated with good grades. I took a year off to work and be with her, then I started out at University of Wisconsin-Milwaukee. I was in the Criminal Justice program, and I wanted to double major in Psychology. I was also in the Honors College and Pre-Law.

It was rough because I had my daughter and worked multiple jobs while going to school full-time. I was also spending time in studios, where people were making $35 an hour to record artists. So, after two years at UWM, I dropped everything and went to Madison to become an audio engineer.

But, after a year there, the placement director offered me and my friend who had just graduated jobs delivering subs, so I quit and came back to Milwaukee. I took two years off (of school), worked a ton of different jobs and was really trying to figure out what I wanted to do, what I would be good at, and what good jobs in the market were. 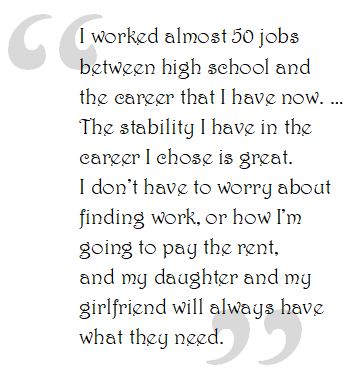 I knew I wanted a skill but wasn’t sure what skill.

I finally settled on Surgical Technology because of my interests and the possibilities and started going to MATC, part-time at first, then full-time. I fully immersed myself in campus and became a tutor. I did my clinicals at (Ascension) Columbia St. Mary’s, the VA (Medical Center), and Froedtert Hospital and got my Associate Degree in 2016.

I worked almost 50 jobs between high school and the career that I have now — everything from retail, sales, warehouses, factories, offices and security to construction, roofing and working with an electrician. Ever since I was 16, there was never a time I didn’t have a job or two.

When I finally made the move to go to MATC, I got a job working in sterile processing the same week I started my clinicals. When I graduated they offered me a job as a surgical technologist, but I also interviewed at the VA Medical Center. They (the VA) told me that they had a position opening soon in the OR (Operating Room) but that there was an immediate opening in sterile processing I should interview for. I ended up coming to the VA sterile processing department. I had to be patient for my spot in the OR, though.

It took over a year, but now I am finally here in the VA OR, and it is by far the greatest job I’ve ever had.

The stability I have in the career I chose is great. I don’t have to worry about finding work, or how I’m going to pay the rent, and my daughter and my girlfriend will always have what they need.

I know my family is proud.

If you would like to chat with Shaun, feel free to search for him on Facebook or LinkedIn.