This guide describes what 'fake news' is and how to spot it.

What is Fake News?

Sadly, the days of anchorman Walter Cronkite, who was often cited as "the most trusted man in America," are over...and now we have 'fake news.'  Politifact describes fake news as "made-up stuff, masterfully manipulated to look like credible journalistic reports that are easily spread online to large audiences willing to believe the fictions and spread the word." While hoaxes and conspiracy theories are nothing new, and many people believe and/or accept that most politicians have bent the truth at some point, fake news spreads primarily because of the viral nature of social media.
The motives for creating these fake news sites can be political (on both sides of the aisle), monetary (when posters are paid by the number of clicks), or just for the fascination of seeing it go viral.
Unfortunately, the terms 'alternative truth' and 'post-truth' have also entered our vocabulary. And the term 'fake news' is also being used now by some people to describe legitimate news organizations' stories, when they don't like or agree with the story.
Why is this important? Because many adults view fake news headlines as accurate, especially when it supports what they already believe. And a Stanford Study reported that young people are easily duped when their information comes through social media channels. When people can't distinguish between fact and fiction, it could give rise to increased polarity, censorship, and distrust.
Learn how to spot the fakes and avoid perpetuating them. 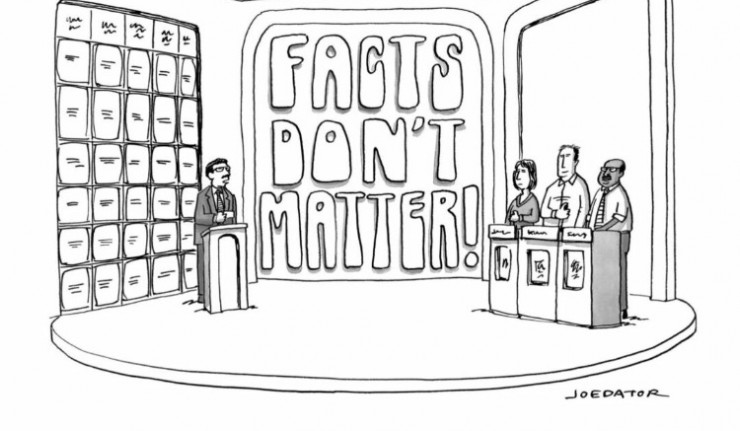 “I’m sorry, Jeannie, your answer was correct, but Kevin shouted his incorrect answer over yours, so he gets the points.”

Relating to or denoting circumstances in which objective facts are less influential in shaping public opinion than appeals  to emotion and personal belief.

Video: How to Choose Your News